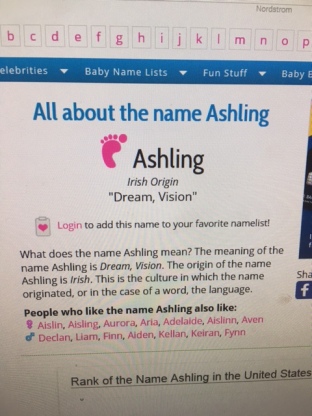 Ashling was the only named we all loved-thus making it an easy choice!  We decided to “Americanize” the spelling of the name just like we did for Keira (Ciara). In Ireland Ashling is spelt Aisling but I thought it would be too confusing here.

Ever since we got pregnant with Keira we have had a “list” of Irish Girl’s names we both liked. I have always loved the name Fiona and was sure that we would use Fiona for our next girl. Well Keira would not even consider it. She was adamant that her sister would not be named Fiona. Lets just say my six year old won that battle….

Domhnall and I mentioned about 5 names to the kids and they both immediately loved Ashling. Good thing Ashling was also our favorite on the list.

On a plus side-we also LOVE the meaning. Ashling means Dream.  It seems so fitting for Ashling’s story, our desperate want of a 3rd child, and well I just think its perfect for her.  Keira means “dark haired.”  If you look and Donny and me it would have seemed accurate but instead Keira is my blond haired blue eyed girl. Connor means wise-which while isn’t the first word I would use to describe him- is still nice.

We decided on Ashling before we received her file. When we received her file and saw her name was Si Ying-we had to smile. We love how similar it sounds and hope it makes the name transition easier. Of course I am sure as a teenager she will give us grief for having a first and middle name that sound very similar!